The air moving industry uses a common term to describe certain inlet and outlet conditions that adversely affect fan performance. The term used is “system effect”. Perhaps the term should be “fan installation effect”, because system effect results from the difference in how the fan was tested, compared to how it is installed. To minimize system effects, air must enter or leave a fan uniformly.

First let’s take a look at how fans are tested and cataloged. Most fans available in today’s market bear AMCA Certified Rating Seals. This means that the fan manufacturer followed the test procedures as outlined in AMCA Publication 210 and tested the fan in one of the standardized configurations approved by AMCA. One of the requirements of AMCA, is that directly under the cataloged performance for a given fan model, the fan manufacturer must make a statement as to how that product was tested. Paying attention to these statements is the first step in avoiding system effect problems.

Roof exhaust fans: Performance shown is for Installation Type A: Free inlet, Free outlet. Power rating (BHP) does not include drive losses. Performance ratings do not include the effects of appurtenances in the airstream.

Tube axial fans: Performance shown is for Installation Type B: Free inlet, ducted outlet. Power rating (BHP) does not include drive losses. Performance ratings do not include the effects of appurtenances in the airstream.

Centrifugal fans: Performance shown is for Installation Type B: Free inlet, ducted outlet. Power rating (BHP) does not include drive losses. Performance ratings do not include the effects of appurtenances in the airstream.

It is important to realize that fan manufacturers can only guarantee the fan to perform as tested. In the examples shown, not one of the fans were tested with obstructions, such as elbows, guards or dampers, directly at the fan inlet or outlet. These obstructions cause additional losses that are not included in the fan manufacturer’s tests, and in many cases, are not included in the designers’ usual system resistance calculations. Most designers are well trained in determining the resistance that occurs in the system’s ducts, filters, dampers and elbows that are located some distance from the fan, but they pay little attention to obstructions near the fan. The interaction of the air and the obstruction just prior to the fan causes the additional losses known as system effects.

The following figures illustrate how fans are tested in comparison to how they are sometimes installed.

Figure 1 illustrates how roof exhausters are tested. Additional vertical straight duct would have little if any effect. Figures 2 and 3 illustrate roof exhaust fan installations having system effects. Figure 3 illustrates the worst case, because the damper is located in a turbulent airstream. To improve on installations where horizontal ducts are used directly under the roof line, turning vanes should be installed in the elbows. In addition, a higher curb or extended base should be used. Higher curbs result in the elbow being further from the damper and fan inlet.

Figure 1 is typical of how roof exhausters are tested. AMCA Publication refers to this set up as “Type A: Free inlet, free outlet.”

Figure 2 illustrates a poor installation with horizontal duct and an abrupt elbow at the fan inlet causing system effect.

Figure 3 illustrates the same installation as Figure 2 with the addition of a damper causing even greater system effect.

Figure 4 illustrates how tube axial fans are tested. Installations with straight inlet ducts and inlet bells would result in similar performance. Without a discharge duct, a system effect will occur. (See figure 12 on page 4 for recommended discharge.) Inline installations are subject to system effect both at the fan inlet and outlet, as shown in Figures 5 and 6. Figure 5 illustrates a poor inlet condition with an elbow directly at the fan inlet. Figure 6 illustrates a poor outlet condition where the fan discharges too close to a wall. Inline fans require the appropriate length of discharge duct in order to achieve cataloged performance. (Refer to figure 12 below.)

Figure 4 is typical of how tube axial fans are tested. AMCA refers to this set-up as “Type B: Free inlet, ducted outlet.”

Figure 5 illustrates a poor installation with an elbow directly at the fan inlet. The air entering the fan is forced to one side.

Figure 6 illustrates a poor installation with the fan located too close to a wall.

Figure 7 illustrates how housed centrifugal fans are tested. Centrifugal fan installations are subject to the greatest possibilities of system effect due to the possibilities of both ducted inlets and outlets, plus multiple available arrangements, discharge positions, and CW or CCW rotations. Figure 8a illustrates a poor installation with an elbow directly at the fan discharge. This type of installation can be avoided by selecting a fan with the correct rotation and discharge position as shown in figure 8b.

Figure 7 is typical of how centrifugal fans are tested. AMCA refers to this set up as “Type B: free inlet, ducted outlet.”

Figure 8a illustrates a poor installation with an elbow directly at the fan discharge.

Figure 8b illustrates a typical installation with an elbow directly at the fan discharge. Discharge and rotation have been selected to match the fans field conditions of figure 8a.

Figure 9 illustrates a poor installation with an abrupt discharge into a plenum.

Figure 10 illustrates a poor installation with an elbow directly at the fan inlet.

Figure 9 illustrates another poor installation with an abrupt discharge into a plenum. A system effect results if a given length of discharge duct is not present. (See figure 12 below for recommended discharge ductwork.)

Both figures 10 and 11 illustrate installation with improper inlet conditions. Figure 10 could be improved with at least one fan wheel diameter of straight duct between the fan and the elbow. Installation as shown in figure 11 should be avoided if possible because the effect of inlet spin is difficult to define and correct.

Fan installations with system effects should be avoided if possible. However, in many cases space constraints or other factors prohibit designers to allow for ideal conditions.

The following conditions (listed by inlet and outlet) cover the most common causes of system effect.

The following recommendations will help in avoiding installation problems: 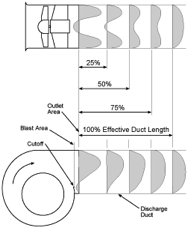 Figure 12 illustrates the need to use a straight duct length on the discharge of both inline and centrifugal fans. In order to achieve a uniform velocity profile, a 100% effective duct length must be used. To calculate the 100% effective length, use 2.5 duct diameters for 2500 FPM (or less). Add one duct diameter for each additional 1000 FPM.

It’s understandable that in many cases an installation will end up having an obstruction at the inlet or outlet (or both) causing system effect. If these situations cannot be avoided at the design stage, the system effect should be estimated and added to the calculated system resistance. Keep in mind that the standard procedures for the design of duct systems are all based on the assumptions of uniform flow profiles in the system. The standard adds for resistance of elbows does not account for the loss when the elbow is close to the fan. AMCA has recognized this problem and has published guidelines on how to compensate for system effects in its Publication 201, “Fans and Systems”. The designers who fully understand system effects, and design to avoid them, must also follow-up with the installers to make sure the installation is as planned.

What are the penalties of system effect? Even when we recognize causes of system effect and we compensate for their losses, penalties result. The penalty starts with fans selected at higher speeds to compensate for additional losses. Higher speeds result in larger motors, increased cost, reduced efficiencies, increased vibration, and acoustical effects. Acoustical effects are usually completely overlooked even though the acoustic system effect penalty might be quite severe. The severity depends on how inadequate the fan to system connection is. In any case, you cannot expect the fan sound ratings to be as cataloged if system effect exists.

Trouble shooting existing installations when the system is short of air and pressure due to overlooked system effects or poor installation practices can be quite interesting. In most of these cases, it’s very difficult to take accurate performance readings because of obstruction and turbulence at the fan inlet or outlet.

And now the finger pointing starts. Is it the fan or is it a system problem? So the big question arises, is the fan installed exactly as tested? In most cases, a visual inspection of the installation will lead you to a clear answer.

To solve deficient fan system performance problems, it helps to have a clear understanding of fan and system curves plus a knowledge of how to apply the fan laws. 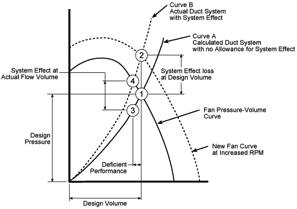 Point 2 is the design volume on the corrected system curve.

Point 3 is where the deficient volume falls on the original system curve.

Point 4 is where the deficient volume falls on the corrected system curve.

Here’s where the fan laws come into play. If 20% more air is required, the fan speed will need to be increased 20%. The resulting static pressure will be 44% higher and the BHP will be 73% higher than the original values. A new fan curve is developed as shown in figure 13. The problem may not be over at this point. New fan drives and a larger motor may be required. Hopefully, the original fan can handle these new conditions. Direct drive fans present even a greater problem than belt drive fans. In some cases, it’s not possible to use the existing fan unless the installation can be modified to eliminate or reduce the causes of system effect.

In summary, here are a few points to consider:

In correcting installations with system effect, changing the ductwork should not be the last consideration. Remember the penalties of system effect will remain for the life of the project.